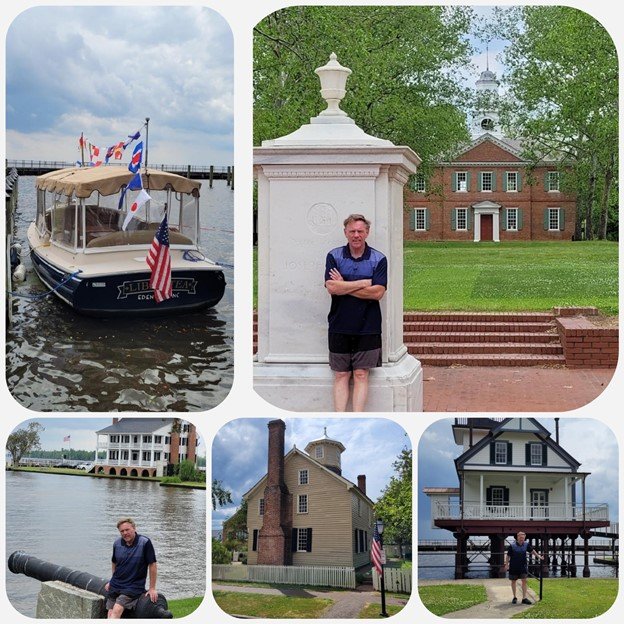 We talk a lot about privilege these days and I am thinking one of the greatest privileges is the prerogative to go where we please, when we please. Today is all about having the free rein / privilege to change course when I get wind of something new.

We all know the Outer Banks of North Carolina. The Outer Banks are why I am in the neighborhood rethinking Daytripping’s OBX tour. But the Inner Banks is a term new to me – turns out Inner Banks is new – the term “Inner Banks” is part of a 21st – century attempt to rebrand the coastal plain region of eastern NC previously known as the Carolina Sandhills. Around the time of the Civil War, people from this area were known as “Goobers”. But that is a story for another day.

The highlights of the Inner Banks are the Great Dismal Swamp and the town of Edenton, NC. – where I am fortunate enough to spend my day.

Forbes Magazine has called Edenton the South’s prettiest small town. I am particularly drawn to small towns – especially the ones where time moves at its own pace and one look can send your spirit soaring. Edenton is more than just crazy pretty – history is vividly evident here – you cannot make a turn without bumping into history and significant players in that history – this town has character and authentic old charm.

Edenton was founded in 1712 on the banks of the Albemarle Sound and is the oldest continually settled place in North Carolina. After Jamestown failed, people moved here. Early on it was a prosperous seaport village. After the Civil War, it was an important railroad hub and then an industrial center, producing cotton textiles, peanuts, and lumber. It was North Carolina’s Colonial capital in the early 1700s, birthplace of fugitive slave, writer and abolitionist Harriet Jacobs, home to James Iredell, one of the first Justices of the Supreme Court appointed by George Washington and Joseph Hewes signer of the Declaration of Independence. Standing on the corner of Broad and Water Streets, pondering which direction to wander, a slow moving Trolley passes by and I hear the tour guide saying “Edenton homes are known for their porches” – a town of porches – what could be finer.

The historic district is lined with stately Victorian homes all wrapped with grand porches, adorned with swings and Southern-style rocking chairs. Grand homes with gables, sleeping porches and historical markers. Quiet treasures preserved through the years. The town’s 1767 courthouse – North Carolina’s oldest – faces the water and overlooks a lawn lined with gracious homes. Including the 1782 home that belonged to Penelope Barker, who was one of America’s earliest and best-known female activists. During the American Revolution, Penelope signed her name to a piece of paper, and another woman signed the same paper, and another did, too, and more followed, until 50 of them had organized the first full-blown women’s movement in the United States history – the 1774 Edenton Tea Party – boycott of British goods.

Downtown is right out of the quaint, small-town handbook and triggers memories of hometown main streets before malls. On the town green along the waterfront sits an amazing little lighthouse – the 1886 Roanoke River Lighthouse, believed to be the last remaining original screw-pile light house left in the US and the world. Originally situated along the river close to town, in 2007 the dilapidated lighthouse was moved to this location, restored and is now a beautiful landmark.

In the harbor, I stumble across the “Liber-Tea” a spiffy electric boat offering scenic cruises, at the Visitor’s Center, I learn that the Women’s Club presents a biannual Pilgrimage tour of historic homes and gardens with docents in colonial attire, carriage rides and afternoon tea in the court house – still more reasons to make this a must stop on our next Outer Banks tour.

Whether it is the horseshoe-shaped town surrounded by cypress tress and the Ablemarle Sound, the flag lined main street, the scent of honeysuckle in the air or the weathered headstones from the 1700’s under the shade of giant magnolias in St Paul Episcopal cemetery – I love this little town and conclude that “Eden”ton is a fitting name – charming and historic – a real garden of beauty and history.

Now, I am headed off to look for some of that “Liber-tea” and a scone. See you here next Wednesday.