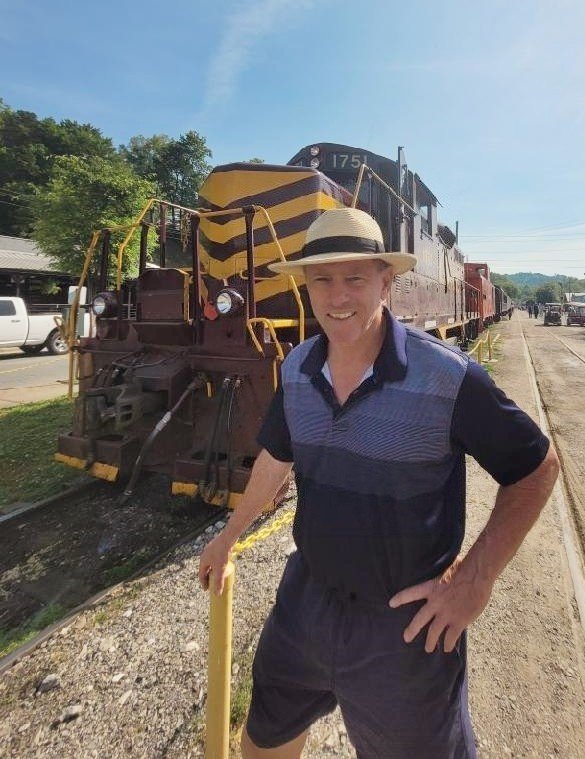 Bryson City, NC – A Jewel of a Small Town

Back in the Smoky Mountains and I remember the lessons learned on my past excursion. I have turned back the clock to before GPS, am armed with paper maps, have posted a navigator in the passenger seat (like in the old days) and am embracing the forgotten joys of route finding and bickering. And sure enough, here I am in Bryson City, NC without help of my navigation system. I may never use Siri again.

Bryson City is tucked cozily alongside the Great Smoky Mountains and is every inch a mountain enclave. Amid the splendor of its setting, the town itself, a 19-th century delight of brick buildings and broad sidewalks, hums with its own sense of easy charm. This pretty little hamlet could be a set from a Hollywood movie – a modern day Mayberry – beginning with the flower basket festooned bridge spanning the Tuckasegee River, the colorful storefronts along the main street are made for strolling and shopping and the historic Great Smoky Mountain Train Depot is right in the heart of it. The railroad, which makes its home here, is the reason for my visit, and I can hear the whistle of the locomotive calling me to take a ride. I was heart set on riding ‘The Steam of the Smokies’, #1702 locomotive that dates back to 1942 and was an official commissioned WWII Steam Engine plan – one of only two remaining – and disappointed it was not running today. I love a steam engine – there is nothing like a ride behind steam. But the diesel engine train covers the same route so I hop onboard to check out the Tuckasegee River Excursion which take us through the breath-taking scenery of Western North Carolina to the artsy village of Dillsboro, NC where we layover. This rustic longtime art and craft community has been a tourist destination since the late 1800s. With blocks of century old storefronts chock full of crafters, pottery shops, fine art studios and great places to eat. I spend my layover time visiting the Appalachian Women’s Museum – the first ever museum dedicated to Southern Appalachian women offers exhibits and a glimpse into their lives. I entered expecting to see homemade quilts and baskets – hoping for some traditional Appalachian music – but instead learned the stories of extraordinary women living ordinary lives and just how hard life was for women here, raising children with very little means, making a living in this isolated part of America. I also learned that these women faced whatever came their way with determination, grit and grace. No time for lunch so boarded the train for the return to Bryson City hungry. Back at the depot I had been looking forward to participating in the railroad turntable experience – where passengers assist the crew in manually turning the engine around ready for its trip back in the opposite direction – but – they only need to do that for steam engines – I knew I wanted to ride the steam train.

This region has been inhabited by humans since before the Cherokee Nation and if the mountains could talk they would tell you of the forced removal of the Cherokee and their eventual return. They would talk of the national effort to build Fontana Dam in record time helping power the industry that won WWII. And tell stories of former residents like author Horace Kephart – renowned for his classic works Camping and Woodcraft and Our Southern Highlanders – one of the seminal authors of Southern Appalachia. In the Bryson City Cemetery his humble monument reads: Scholar, Author, Outdoorsman He loved his neighbors and pictured them in “Our Southern Highlanders” His vision helped to create the Great Smoky Mountains National Park. Then there is the tallest gravestone on the hill with a picturesque angel pointing up to the sky. The grave belongs to Fannie Everett Clancy. While it’s never been confirmed, scholars think the angel is the statue described in Thomas Wolfe’s “Look Homeward Angel.”

When Daytripping travels to Bryson City we will ride the steam locomotive, eat Bar-B-Que, try the local favorite, trout caviar and add our story the Mountain’s history.