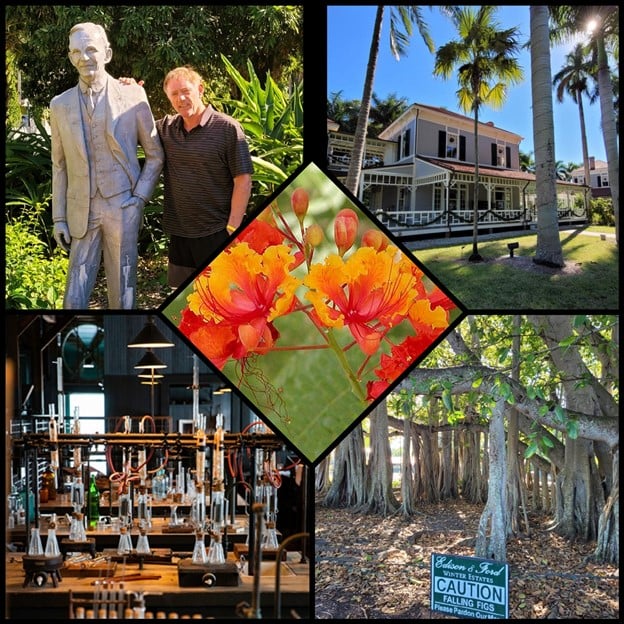 The RV is repaired and I am finally in Fort Myers. On all my trips to Florida I had never yet visited one of Florida’s most noteworthy historical landmarks: the Edison & Ford Winter Estates.

The winter homes of the two titans of American industry sit side-by-side in a tropical paradise of lush botanical gardens. At it’s edge the Calooshatchee River and along the frontage road, Edison planted more than 2,000 Royal Palm trees. Today, Fort Myers is known as the “City of Palms”.

As with the bus, RV’s are required to park in the outermost remote parking area. But, I was glad for the hike as along the way a massive Banyan tree attracted my attention and awe. A gift in 1925 from his friend Harvey Firestone who obtained this tree in Calcutta. At the time, it was four feet high and two inches in diameter. Nearly a century later, it covers almost an acre of grounds and is thought to be the largest banyan in the United States.

It all began in 1885 when Thomas Edison, at 38 years old, purchased the land for $2,750 and began sketching the layout of his home. When Edison married Mina in 1886, Fort Myers became their honeymoon haven and winter home. “This house is a dream . . . and we are living in Fairyland,” Edison’s wife Mina wrote of the Florida retreat, which was named “Seminole Lodge.”

Ford bought property next door to his mentor in 1916, naming it “The Mangoes”. As a youth, the motor company founder worked at Edison company in Detroit. The budding auto magnate used his spare time tinkering with gas-powered engines. The two entrepreneurs met at a convention in 1896, and Edison encouraged the younger man. The two proved to be kindred spirits. The men spent hours sitting on their porches, discussing projects, planning trips, listening to Mina play the piano, and perhaps playing Parcheesi, Edison’s favorite game. I have toured, studied and read much about these trailblazers but this is the first time I had a sense of what good friends the two men actually were.

Thomas Alva Edison is considered one of America’s greatest inventors. He developed many devices that became part of everyday life. A motion picture camera, the phonograph and of course, the electric light bulb. When asked which of his inventions he liked best, Mr. Edison replied: “I like the phonograph best. Doubtless that is because I love music”.

Dubbed “The Wizard of Menlo Park,” Edison holds 1,084 US patents including a stock ticker, a mechanical vote counter, a battery for an electric car. He developed a system of electric-power generation and distribution allowing homes, businesses, and factories to enter the age of industrialization. Edison was “green” before “green” was fashionable. His words on the subject are posted in the museum: “I’d put my money on the sun and solar energy. What a source of power! I hope we don’t have to wait until oil and coal run out before we tackle that.” Edison wrote that in 1931.

During WWI, Edison, Ford and another entrepreneur, Harvey Firestone, built a Botanical Research Lab on the property. They hoped to find a cheap method to obtain rubber. As a result, Edison and his researchers established many of today’s estate plantings. I was fascinated by the laboratory and had the feeling that Edison might walk in the door at any moment and it would all come alive.
If gardening is your interest, the botanical gardens contain more than 1,700 plants with over 400 species from six continents. A butterfly garden, unique species of heritage plants, orchids and tropical fruit… it’s not every day you can see an African sausage tree with hot-dog shaped fruit. The largest formal garden on the property, a Moonlight Garden. Designed in 1929 by Ellen Biddle Shipman, filled with all white, fragrant night blooming plants, flowers and a reflection pool to capture the moonlight.
Edison died in 1931, shortly after cutting the ribbon to dedicate the new Edison Bridge over the Caloosahatchee River.
In 1947, Mina deeded the Estate to the City of Fort Myers. The Ford’s sold The Mangoes in 1945 to a private family who then sold the estate to the City of Fort Myers in the late 1980s. The Edison & Ford Winter Estate was opened to the public in 1990.
On my long walk back to the Bus/RV parking lot I had time to wonder if Thomas Edison still held the record for US patents and decided to ask Mr. Google. Turns out that it took 88 years for his record to broken. On July 7, 2015, at the age of 74, Lowell Wood surpassed Edison’s record with the granting of Wood’s 1,085th patent by the US Patent and Trademark Office. As if this outstanding feat isn’t impressive enough, Wood has over 3,000 more patents currently under or awaiting review. I know your jaw just dropped, mine did too! Wood has invented hundreds of products, medical systems and methodologies ranging from an anti-concussion helmet and a mosquito laser, to energy efficient dryer systems and temperature re-stabilized storage systems with regulated cooling.

When I sat down to write this I was sure I would find a way to slip in “it was a light bulb moment” or “the light bulb went off”. Even though I never could work it in wanted to impress you by letting you know that I had thought of it.
If you sign up for Daytripping’s 2022 Mermaids & Manatees tour – currently being sketched out in my mind you will see this magnificent estate. I can’t wait to be touring with you again.