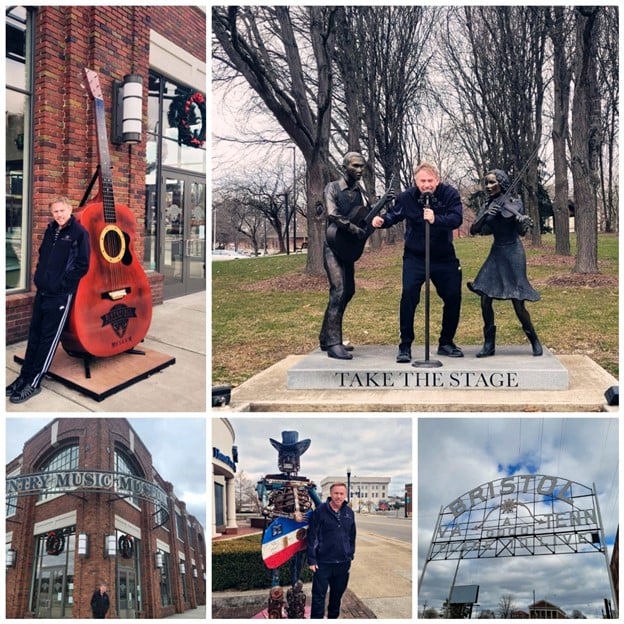 On a whim, I detoured to Bristol VA/TN, where two states face each other across a yellow line down the middle of State Street – which means in the downtown area you can be standing in two states at once. The Bristol’s look like one city. But drive around town and Google Maps will suddenly say, “Welcome to Tennessee,” and a turn later “Welcome to Virginia” and a few turns later – well, you get the idea. Small brass plaques embedded down the center line of State Street say “Tennessee” on one side and “Virginia” on the other. Though the twin-cities operate as two separate towns, they converge in one colorful downtown. Crowning the main “drag” is an electric sign pointing in one direction to VA and the other to Tenn – and declaring the single town a “good place to live”.
I came here because I heard Bristol is a sort of Appalachian Broadway as well as home to the Birthplace of Country Music. A record executive, Ralph Peer, came to the area to record the fiddle and banjo sounds in the surrounding mountains. “The Victor Co. will have a recording machine in Bristol for 10 days beginning Monday to record records — inquire at our store.” That was the text in a small box that appeared in the Bristol News-Bulletin on July 24, 1927. This is how ‘hillbilly’ music began its journey into the mainstream and the first country music recordings were made for national distribution. A.P. Carter, his wife Sara and Sara’s teenage sister Maybelle Addington were from the surrounding countryside, and Peer knew he’d struck gold — especially when Maybelle and Sara came back the next morning and cut two duets. The Carter Family, as they called themselves, became one of the biggest acts in America, continuing on in this original form until 1942.

At the Birthplace of Country Music Museum, a Smithsonian affiliate, I discover the musical heritage of Appalachia and literally learned everything I didn’t know I wanted to know about the origins of country music. The museum is not large, but from the introductory video to the final song, it is perfectly done. On display are relevant instruments, fiddle, banjo, harp guitar, kazoo and jaw harp played by some the best musicians ever. A great display on the famous Bristol native, Tennessee Ernie Ford – his most famous song is the coal miner ballad “16 Tons”. In 1984, President Reagan awarded Tennessee Ernie Ford the Presidential Metal of Freedom. Hearing old time country music by musicians who have gone on was priceless. I especially enjoyed an exhibit of Marty Stuart’s photography. Sixty black & white images of quiet moments with legends like Loretta Lynn, Willie Nelson and Earl Scruggs and everyday folks Stuart encountered on the road. Besides being talented you can tell he had a great fondness for his subjects. On top of all that – there is a booth where I was able to record myself singing along with country favorites and – be really glad I don’t know how to add sound to this message because – I was able to tape my own yodeling session! If only I had discovered this talent earlier I feel certain my life would have taken a far different path.

Before leaving Bristol, I can’t resist a take out burger from the a cherished hole-in-the-wall Burger Bar, where burgers are named for Hank Williams – the last place he was last seen alive. I had ‘Can’t Get You Off My Mind’ cheese burger.
While it is still light, I decide to drive to the Carter Family Fold Music Center in Hiltons, VA at the foot of Clinch Mountain, memorialized in song by the Carters. The original Carter Family lived where the Fold is today and the “barn” is where Johnny Cash performed his final concert a few months before his death. The Carter Fold is on Virginia’s “The Crooked Road”, a more than 300 mile musical heritage trail connecting museums that tell the narrative of this quintessentially American musical form and musical venues that are its soundtrack.

A Place of Beauty – A Place of Song. The age old tapestry of this place is woven as much by music, faith and family as it is by county and state line. I felt fortunate to be in this place, at this time. “Music heals what medicine cannot touch”.