Guess What Day It Is: Week 2 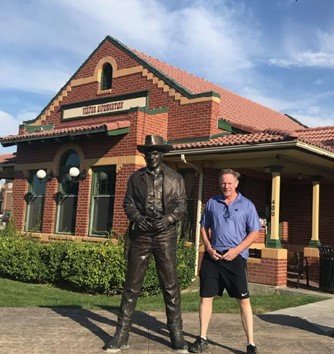 My heart is with you as our beloved Sonoma County is in danger from fire, again. I hope and pray that all of you are far from harm’s way. Thank you to everyone who has reached out to say you are safe. I debated whether you would want to follow my travels this week but I decided some thoughts of future trips would be welcome. Please take care of yourselves until we meet again.

And now… Guess What Day It Is!

Get the hell out of Dodge!

Fifty years ago when I last visited Dodge City it was on a road trip from Napa to Cave City, Arkansas with my Grandpa. I was beyond eager to see it again.

Sadly, the rowdy, “wild west” Dodge City of my seven year old memory has been rounded up, corralled inside the Boot Hill Museum and tamed…. Today, almost nothing of this rip-roaring, reckless “Hell on the Plains” famous for its gunfights – despite marshals like Bat Masterson and Wyatt Earp keeping order and planting bad guys in the Boot Hill Cemetery – survives. Outside the Boot Hill Museum, what you see in Dodge City mostly dates from the 1920s and is by and large a cattle-ranching community with extensive stockyards surrounding the small downtown area.
But, once inside the walls of the fake but fun Boot Hill Museum, on its recreated Front Street, gunfights, medicine shows and Miss Kitty with her Can-Can girls are just as I remembered. Now might be a good time to mention that Boot Hill got its name from the days when gunfighters were buried with their boots on in graves so shallow that the tips of their boots were said to stick up above the earth – a bit morbid yes but things were different in those days…