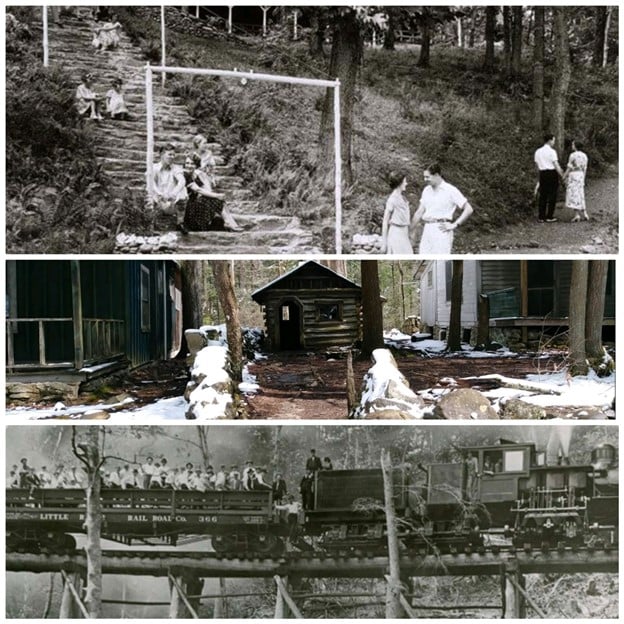 Tucked away in the Great Smoky Mountains in eastern Tennessee, is a once affluent mountain retreat that time forgot. Now just an eerie ghost town – in the early 1900’s Elkmont was the premier summer destination for the upper echelons of Knoxville society, bustling with hand-crafted log cabins and plush social clubs – the community even boasted a Millionaires’ Row.

What brought me here wasn’t just the intriguing history of the town and its people but the role they played in the creation of the Great Smoky Mountains National Park.

In 1901 Colonel Wilson B. Townsend, a Pennsylvania entrepreneur, purchased 86,000 acres of land along Little River and established the Little River Lumber Company. As the valley was slowly stripped of its valuable timber, Townsend began to advertise the area as a mountain getaway. In 1909, Little River Railroad began offering the “Elkmont Special” — a non-stop train service from Knoxville to Elkmont. Day-trippers paid $1.95 to ride in open observation cars attached to the back of a logging train to escape the stifling heat of Knoxville and while away the dog days of summer in the crisp mountain air – soon an observation car was added on the logging train and later passenger coaches. In 1910 the Little River Lumber Company sold land to the Appalachian Club – a private social club of Knoxville businessmen who built a hotel and clubhouse to be used as a gathering place for members and glittering parties. The Appalachian Club sold plots of land which Knoxville’s wealthiest residents quickly snapped up to build luxury summer cabins. The rustic cottages became known as Society Hill.

But, membership in the Club was expensive so in 1912, Charles B Carter built the Wonderland Hotel (cool name, don’t you think) only two miles from the Appalachian Club. The lodge was decked out in rustic décor featuring large stone and brick fireplaces, hardwood flooring and country-style furniture, rocking chairs lined the porch and stone steps led from the station to the hotel. Rocks from the Little River were cemented at the top of the steps, spelling out ‘Wonderland’. The steps can still be seen today.
These were golden years filled with dancing to live three piece orchestra’s, the river was dammed for swimming, and, reportedly, taffy pulls were such a popular activity that prizes were awarded for the whitest taffy – cigars for men and sewing baskets for the women. Parties would end with a boisterous round of singing, “Elkmont Will Shine” – Elkmont will shine tonight, Elkmont will shine!
By 1926, they ceased logging entirely and Elkmont began to fade away. Around that same time, William P Davis, a cottage owner at Elkmont, visited Yellowstone and wanted to have a national park in Smoky Mountains. He teamed up with Colonel David Chapman, a founder of the Appalachian Club. The Great Smoky Mountains Conservation Association was established by the Knoxville Automobile Club and the chamber of commerce. Federal and state governments were lobbied and Chapman hosted legislators at Elkmont to sell them on the park. The plan worked like a charm and the US government agreed to establish the national park, if Tennessee and North Carolina purchased the land. The association set to work acquiring land to donate for the park. In 1927, the LRLC sold 76,507 acres for the park. More land was needed, but there were people living on it and while many people were forced to leave their land when they sold to the park, residents in Elkmont itself and the clubs were able to stay, negotiating lifetime leases. By 1934, the Great Smoky Mountains National Park plan became official. The Civilian Conservation Corps moved into Elkmont, now a shadow of its former self. The New Deal organization worked to develop infrastructure and facilities in the new park. The CCC camp closed in 1936. President Franklin D. Roosevelt dedicated the Great Smoky Mountains National Park on September 2, 1940, “for the permanent enjoyment of the people.”

Relics of this long-past era and many of the historic cottages are waiting to be brought back to life by the National Park Service. To date a handful of cabins have been fully restored, lovingly preserved and are open for tours. As the centerpiece of the Elkmont Historic District, the Appalachian Clubhouse has been rehabilitated with the original charm of exposed wooden beams and massive stone fireplaces. Wonderland Hotel was placed on the National Register of Historic Places but unfortunately the site completely burned down in 2016. There is hope on the horizon with a goal for all cabins to be restored by 2025. Even in it’s current state it is easy to see why people have always been drawn here.

After all of the miles I’ve driven through the Great Smoky Mountain National Park, I am grateful to the people of Elkmont, and their vision to leave us a park full of memories and spirits. When you come, make sure to go outside early in the morning to catch the smoky haze that gives these mountains their magical quality and the smokies their name. I’m grateful they are here.
Fun Fact: Each and every year in the Smoky Mountains, for a magical few nights in June, is an incredible natural phenomenon, known as “synchronous fireflies”. This breathtaking show put on by nature resembles a psychedelic combination of stars falling and fireworks exploding. Tens-of-thousands of lightening bugs gather in swarms and flash in harmony as the entire forest alternates between light and darkness. Right here, in Elkmont, is the largest population of synchronous fireflies in the Western Hemisphere.