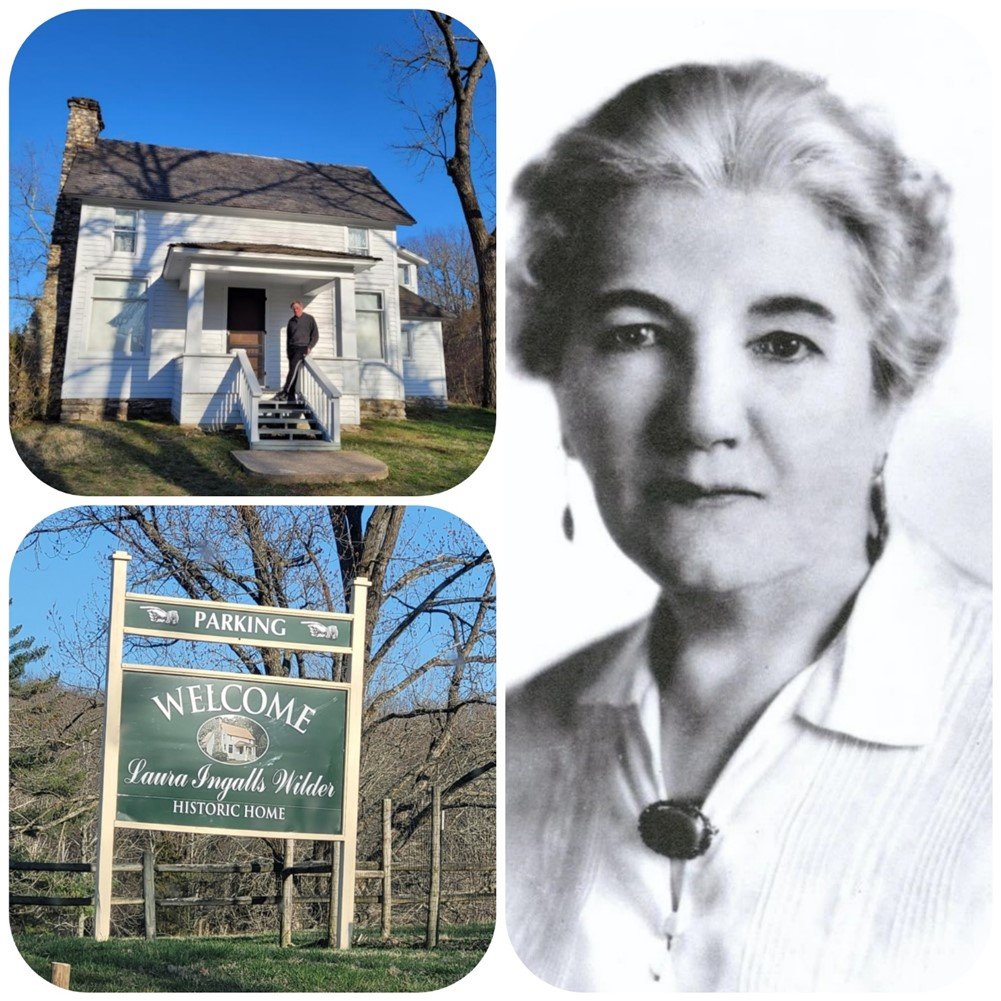 Here am I on the porch of Rocky Ridge Farm in Mansfield, Mo. – the home where author Laura Ingalls Wilder – lived from age 27 until her death at age 90. It is here on this farm that she wrote by hand the Little House on the Prairie Books between 1932 and 1943.

Following the bank meeting I was heading to one of my favorite Midwest Americana experiences; Lambert’s Café – Home of the Throwed Roll – honestly they throw your hot-out-of-the-oven-roll at you – of course, I had my meal take out this time so the rolls and molasses came in a bag – but I can remember the days of jumping out of my seat to catch my roll before it sailed over my head to someone at a nearby table. No matter what entrée you order, your meal at Lambert’s comes with what they call ‘Passed Sides’ – all you can eat servings of Fried Okra, Black Eyed Peas, Fried Potatoes & Onions, Macaroni & Tomatoes, Apple Butter, Sorghum Molasses and hot rolls. So much more amusing dining in but the food was just as tasty in my RV.

It is a sunny, bright spring day in the Missouri Ozarks and I was yearning to be out in the fresh air, stretch my legs and walk off lunch when The Laura Ingalls Wilder Historic Home & Museum sign on the highway caught my attention – I hadn’t read the books but I did watch the TV series with Michael Landon and always liked Laura, she was a tom-boy not a goody two shoes – I remember she took on that mean Nellie Olsen and she was brave, she lived through difficult times and she loved her Pa – he was the great father, with all the music and stories – everyone wants but not everyone has. I knew Little House on the Prairie was autobiographical so I thought I knew Laura Ingles Wilder. I did not…

In honor of Women’s History Month I thought you might be interested in learning what I discovered about one of the most significant children’s authors in American history. Let’s being with this stunning fact – Mrs. Wilder was 65 years old when she began writing the Little House on the Prairie Books. She was related to President Franklin Delano Roosevelt – whom she did not like. She refused to say “obey” in her wedding vows – “I cannot make a promise that I will not keep, even if I tried. He is said to have replied; “ I’d never expect you to”. Wilder had a historic highway that runs across Minnesota and South Dakota and a crater on Venus named after her. The “Little House” series has become so iconic over the years that it has prompted several spin-off novels, musicals, plays, a Japanese anime series, parades, fashion shows, festivals. Reruns of the iconic “Little House on the Prairie” that first appeared in the ’70s and ’80s are still aired in over 30 countries today. In December 2020, Paramount Television announced a one-hour dramatic reboot of that TV series. In addition to this site in Mansfield, there are Laura Ingalls Wilder museums in De Smet, SD, Walnut Grove and Spring Valley, MN, Pepin, WI and Burr Oak, Iowa. In 2018, the American Library Association removed her name from Laura Ingalls Wilder Lifetime Achievement Award – now ‘The Children’s Literature Legacy Award” because of the series’ racist and dehumanizing portrayals of Native and Black Americans — a reflection of attitudes shared among many white settlers during the time the books were written.

Arriving at the historic farm, the first sight you see is Laura’s and Almanzo’s beloved farmhouse. It remains as it was in 1957 and stands as an official project of the Save America’s Treasures National Trust for Historical Preservation. Laura, Almanzo and daughter, Rose, arrived in Mansfield from South Dakota, August 30, 1894. They purchased a forty-acre farm, which had a one-room log cabin near the spring and ravine. It took 17 years from the time they moved in to when the home was finished in 1913. The home was always a central theme to Laura’s life. The farmhouse held a very special place in both Laura’s and Almanzo’s hearts as they chose to live the last of their days here. Touring the home you see her study and writing desk, as well as the many treasures that remain exactly how Laura left them. A highlight of the museum is Pa’s dear old fiddle, which sits in a glass case near the entrance – it was made in Germany in 1850, and Charles played it until he died in 1902. Before getting back on the road I visited the town cemetery to pay my respects at the graves of Laura, her husband Almanzo, and their daughter Rose.

One of the best things about travel is that out on the road you often find yourself learning something about yourself, as the history you discover lets you see the Big Picture. The more roads I travel, the more I understand that the only thing that stays the same is Change!

Wish you were here,
John