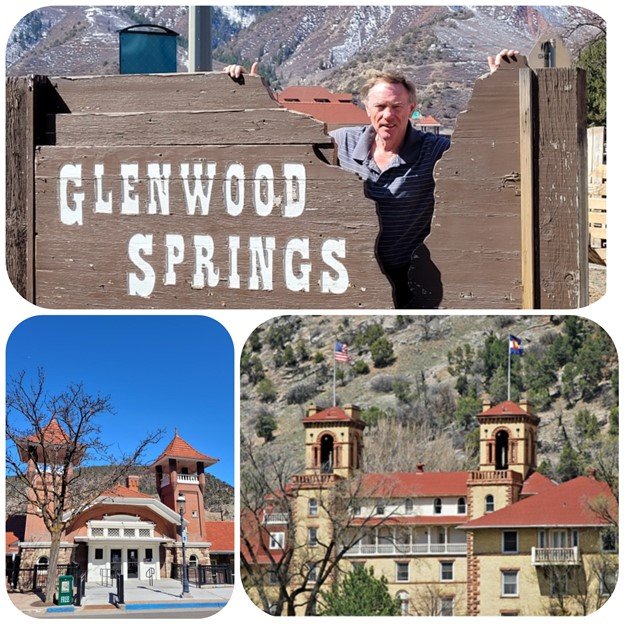 I have long wanted to add Glenwood Springs, CO and the beautiful Hotel Denver to our ‘Trains Around Colorado’ tour, and today I had the opportunity to get to know this historic resort town. Before Glenwood Springs was a hot springs hot spot, it was a Wild West frontier town called Defiance. The raucous and ramshackle town was home to gamblers, gunslingers and entrepreneurs and was the last stop for Doc Holliday, the famed gunslinger, who rests in the Linwood Cemetery. His marker is strewn with playing cards and coins. The Hotel Denver was a favorite hangout of Chicago gangster Diamond Jack Alterie, who shot two men in the lobby of the hotel in 1932. The 1904 train depot across the street welcomed President William Taft in1909 and was a whistle-stop platform for President Harry S. Truman in 1948. Durand’s Opera House hosted John Phillip Sousa in the 1920’s. The years have mellowed the rough-and-tumble beginnings but a stroll through the centuries’ old streets of downtown transport you back to wilder times.
How did Defiance give way to the pleasing name of Glenwood Springs? The wife of Town Founder Isaac Cooper (Sarah) was having a hard time adjusting to the frontier life and, in an attempt to make her environment somewhat more comfortable, persuaded the founders to change the name to Glenwood Springs, after her beloved hometown of Glenwood, Iowa.

Glenwood Springs was one of the first places in the United States to have electric lights. The original lighting was installed in 1897 inside of the Fairy Caves in Iron Mountain. Later, a dam was built in Glenwood Canyon, providing water for the Shoshone power plant. The plant began producing power on May 16, 1909, and retains the largest and oldest water rights to the Colorado River, the “Shoshone Call”, now far more valuable for the protection of Colorado River water rather than the minimal electricity produced.

Steeped in history, the Hotel Colorado was designed in the style of the Villa de Medici in Italy by the same architects who created the Immigration Station at Ellis Island. The “Grand Dame” has been the center of attention since it was built in 1893 and played host to such historical figures as the “Unsinkable” Molly Brown, William Taft and Teddy Roosevelt. According to legend, the teddy bear was born at the Hotel Colorado – to cheer Roosevelt after an unsuccessful hunting day, hotel maids presented him with a stuffed bear pieced together with scraps of old fabric. Later, his daughter Alyce admired it saying, “I will call it Teddy.”

I am running out of words and I haven’t yet mentioned the big attraction – the geothermal hot springs which have drawn people here for centuries, from the Ute Indians to miners and explorers. In 1888, two European settlers saw the potential for wealthy spa-goers and opened the Glenwood Hot Springs Resort – today the world’s largest hot springs pool. And, I have taken for granted the stunning setting of this town in the rugged Rocky Mountains, surrounded by the vast White River National Forest. Perhaps the most majestic scenery is through Glenwood Canyon – home to Hanging Lake with its turquoise waters and waterfalls.

Another time, I will tell you about my newest discovery tucked among the red rocks and cliffs in the Crystal River Valley. Redstone, CO – once a coal town, now a hamlet of Victorian homes and shops with an actual Tudor style castle – some places are magical. If we’re going to see them all, we’ve got to keep rolling on down the road.

See you next Wednesday!
John