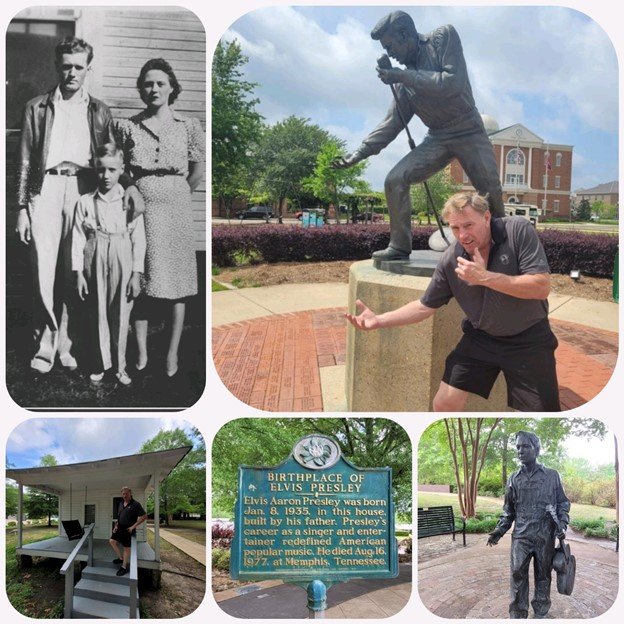 Elvis and a bit of Lewis & Clark

I am singing along to “ A Hunk, A Hunk of Burning Love” on Elvis Radio as I enter Tupelo, MS to see the house where Elvis was born. I have been to Graceland to see his life in his glory many times but today I am exploring his humble beginnings. Tupelo is unquestioningly proud of being the birthplace of the rock ’n roll legend – as well they should be. Before arriving, I knew about the Elvis Birthplace Home Museum but am surprised to find the entire town feeds off the memory of the King and his legacy. Still, I am happy to find a seriously cool little town, prosperous, well preserved and booming.

The deep south is where blues music was born, and gospel music was buried deep in Elvis soul – that fusion of gospel and blues that Elvis came to personify was the first time the two were blended and it transformed the sound of music – Elvis embodies rock ‘n roll as we know it today and the chords he produced continue to define American music today. He recorded 710 songs, stared in 31 films – made women all around the world swoon – served in the Army and he only lived 42 years. He has been dead longer than he lived. But his legacy is so much a part of popular culture and our collective consciousness, it would be hard to avoid knowing about Elvis.

This story is a reminder that humble beginnings can produce a King. This is the mid-1930’s and times were tough for the Presley’s, as well as just about everyone else in Tupelo, MS. He was born in the poorest state in the country, during the Great Depression on the wrong side of the tracks. In 1934, Elvis’ mother, Gladys, was expecting so her husband, Vernon, built a tiny home for them with his own hands. He had help from his father and brother and borrowed the $180 for building materials from his employer. It was in this two-room shotgun shack that Elvis Aaron Presley was born on January 8, 1935. He was one of twins, but sadly, his brother, Jessie Garon Presley did not live. When Elvis was three, his father went to prison for eight months for adding a zero to a $4 check he received for selling a pig. The family defaulted on the loan and were evicted. The Presley family lived in other locations in Tupelo until Elvis was 13. At age 11, his mother bought him a guitar for his birthday. Elvis could be seen around town carrying that guitar, right up to the day Vernon piled his family into their 1939 Plymouth and made the move to Memphis. By age 21, he was famous. He had moved to Memphis but came back to Tupelo in 1956 to perform at the same fairgrounds where he won a prize singing “Ole Shep” at age 10. The next year, in 1957, he gave a concert in Tupelo and donated all the money to the city to build a park on the land surrounding his birthplace home. After his death in 1977, the City of Tupelo formed the Elvis Presley Memorial Foundation to renovate the birthplace and create all that is here today.

On the grounds of Elvis Birthplace Museum is his original home, the little white house with the porch swing, on its original site, restored to its original state, just as it would have been on the day he was born. Here also, is the Assembly of God Pentecostal Church the Presley family worshipped in and an amazing bronze statue of Elvis at 13 years old with his guitar.

I strolled downtown, a charming mix of old and new with great old brick buildings. I stopped in Tupelo Hardware, which opened its doors in 1926 and from where Elvis got his first guitar – visited Reeds – delivering Confidence, Pride and Joy since 1905 and the former place of employment of Gladys Presley. A photo of her in a group of workers wraps the upper wall.

Back in the rig with a milkshake to go from Johnnies on East Main – where Elvis ate as often as he could during his impoverished youth – I turn up the volume on Elvis Radio and sing along to “Be My Little Good Luck Charm”.

Back on Hwy 78, with Tupelo in my rear view mirror I enter the Natchez Trace Parkway and this is where I slip a tidbit about my heroes Lewis & Clark into the Elvis story. In late 1809, Meriwether Lewis left St. Louis to begin an arduous journey to the Federal City – Washington, DC – to clear his name. This journey would lead to his death on the Natchez Trace six weeks later. Just three years after the Lewis & Clark Expedition, the 35 year old Lewis was no longer the hero he had once been. He was deeply in debt and accused of malfeasance by the War Department. After traveling by boat down the Mississippi, Lewis spent a lengthy stint at Fort Pickering – the site of present-day Memphis where he had weighed the risks of going to Washington by sea via New Orleans, or taking the rugged and dangerous Natchez Trace overland through the wilderness. Lewis’s decision to take the Trace may have been ill-fated, but it was not naive; one of the most experienced wilderness travelers in the world, he was also familiar with the Trace and the resident Chickasaw Indians from his days as a young officer. The route from Memphis to the main Chickasaw village, a place called Big Town, was called Pigeon Roost Road. And while the forests and their millions of passenger pigeons are long gone, you can still take a jaunt down Pigeon Roost’s successor road, today’s US 78, and meet up with the Natchez Trace Parkway at the crossroads where Big Town once stood. Today the bustling junction is known as Tupelo, Mississippi, and it just happens to be the birthplace of Elvis Presley, the king of rock and roll.