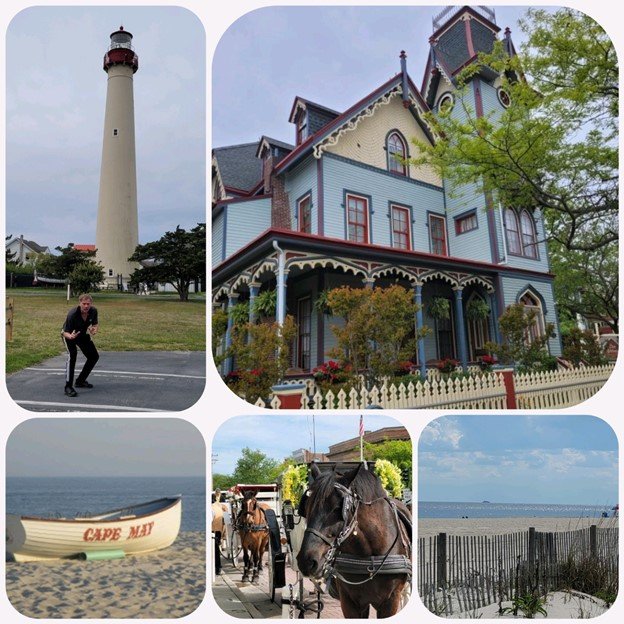 I take it as a sign of a great day ahead when we spot dolphins off the bow of the Lewes/Cape May ferry – they followed along, escorting us to the Cape. Back on land, Exit 0 takes me to Cape May, NJ – one of the nation’s oldest seaside resort’s – people have been vacationing here since the 1700’s. In the same year that the Pilgrims landed at Plymouth, a Dutch captain, Cornelius Jacobsen Mey, explored the Delaware River and named the peninsula Cape Mey, after himself, in 1620. The spelling was later changed to Cape May. Over a century later in 1761 Cape May became the first seashore resort in America. It has been legend here that Abraham Lincoln and his wife spent time here. Five United States presidents, Franklin Pierce, James Buchanan, Ulysses S Grant, Chester Arthur and Benjamin Harrison spent summers at the grand Congress Hotel, escaping the sweltering heat of Washington, DC. In 1882, the famous composer John Philip Sousa composed a march in honor of the Congress Hotel, the “Congress Hall March”.

Cape May is a picture postcard of the past – what sets it apart is it’s sheer number of Victorian homes – the second highest concentration after San Francisco – a fire in 1878 which devastated the city explains how this came to be; the town quickly re-built itself with the modern style of the day – Victorian. These grand old homes, ornamented in gingerbread trim, garnished with pastel paint, boasting airy front porches with people rocking away, line the streets. Apart from the wonderful architecture, horse-drawn carriages weave around town – the sound of their clip-clopping over the stone pavers providing background music to the day, gas lamps dot the sidewalks and trolleys can be seen giving tours. The adorable streets downtown are jammed with mom and pop shops, nostalgic candy and ice cream parlors and a plethora of old-fashioned B&B’s –downright quaintness.

After poking about town, I am eager to go to the beach, but first visit the famous Cape May Lighthouse. Built in 1859 it is one of the oldest in the United States and one of the most photographed. As impressive as it from the ground you really must climb the 199 steps up the cast-iron spiral stairway to see the staggering view. Right down the road, I discover a couple slices of history – a WWII Lookout Tower built in 1942 – one of 15 such fire control towers stretching along this portion of beach, used to triangulate the position of suspicious ships and submarines. And slowly sinking in Delaware Bay – the WWI SS Atlantus – widely known as the “Concrete Ship” – the SS Atlantus first set sail in December 1918. It is the best-known of a dozen concrete ships built to serve in WWI Emergency Fleet; but the war ended a month prior to launch, so the SS Atlantus became a transport boat for troops and then retired to a salvage yard only two years later. But that is not the end of the story, six years later it was purchased, repaired and towed to Cape May along with the two sister ships to create a ferry dock. However, a storm hit and broke the ship free of its anchorage, causing it to crash off the coast. More than 90 years later, the SS Atlantus remains a permanent fixture in the bay continuing to sink – with just the stern visible today.

At last, I am heading to the beach to put my feet in the sand … I settle in to watch the sun set over Delaware Bay while taps play and Old Glory is lowered for the evening – a 40 year tradition. I have a special spot in my heart for this quaint beach town on the cape — Cape May.