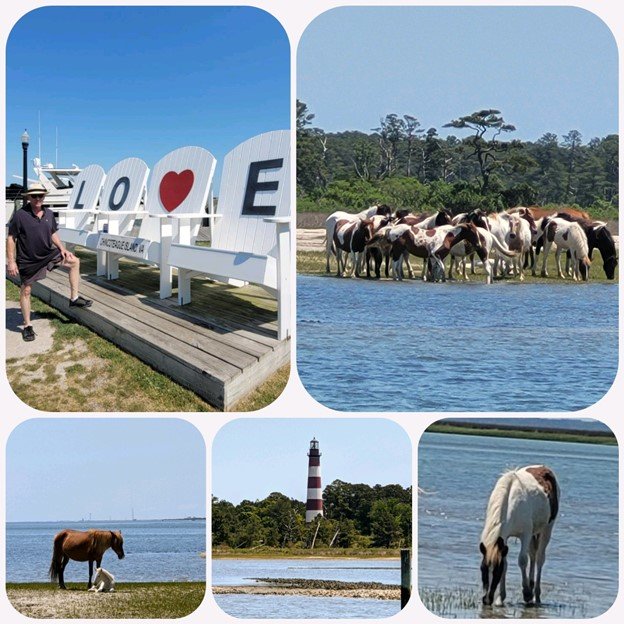 For an island getaway Chincoteague, VA is a must – a hidden gem – the seaside, unspoiled soft sand beaches, relaxing in nature, taking in the wildlife, eating salt water taffy but for me the wild ponies are the lure – made famous by Marguerite Henry’s 1947 novel, “Misty of Chincoteague”.

My route from Cave City to Maryland’s Eastern Shore by way of the 23 mile Chesapeake Bay Tunnel – a mesmerizing bridge that transforms into a tunnel – an engineering wonder – and a thrill to cross. I take the well-marked turn-off to Chincoteague – the best part of the drive is when the I75 leaves behind the forested mainland and transforms into a silver causeway that spans a sea of iridescent green marsh grass, wetlands covered in wildflowers and shimmering blue water finally delivering me to the secluded little island on the horizon. I have the distinct feeling of truly moving into another place and time. The quaint village occupies an entire barrier island and connects via a short bridge span to another barrier island, Assateague, which is home to both the Chincoteague National Wildlife Refuge and Assateague National Seashore.

Eager to see the ponies, I have a private boat tour scheduled first thing so head to the pier to meet Jake -who turns out to be the great pony magnet and guide extraordinaire. Originally from Ohio, Jake moved to the island five years ago but now knows the waters as well as any native – he is incredibly knowledgeable about Chincoteague, Assateague, the history, the community, it’s ecosystems, and of course, all about the ponies. Out of the harbor and fifteen minutes from the pier we see the first band of ponies – and amazingly they are wading in the water. Over the two-hour tour we saw more than 50 ponies at multiples spots. It was especially enchanting to see a white foal – great grand-son of Sufer Dude – the most famous Chincoteague pony since Misty – a dark colored stallion with striking blond mane and tail with a bold personality to match. His son Riptide, born in 2009, has now taken over his dad’s band of a dozen mares. Jake took the boat right up to the beach so I could see the beautiful creatures up close. I learned that the ponies are fully supported and managed by the Chincoteague Volunteer Fire Department. They control the herd size with a pony auction in July. Each year tens of thousands of spectators come to watch the Saltwater Cowboys swim the pony herd from Assateague Island to Chincoteague Island. In addition to the Chincoteague ponies, we saw bald eagles, pelicans, ospreys, ducks, egrets, herons, and oyster beds. We also caught a magnificent view of Assateague’s lighthouse. Then Jake ventured out to open sea in hopes of finding a pod of dolphins, but we did not. We did however have a great view of Wallops Island. NASA has been launching small rockets from Wallops since 1945. In recent years, Wallops has become better known for the large scale rocket launch taking place from the facility. Rockets like Northrup Grumman’s Antares, which routinely launches from Wallops, carrying supplies to the International Space Station. Sadly, I had missed a launch by just three days…

Over lunch at Ropewalk – an open-air waterfront restaurant – while enjoying the most the most delicious Crab Cake Eggrolls, Fried Green Tomatoes and a sliver of Key Lime pie – I decide that the charm of an island is the art of doing nothing on the beach – searching for shells and listening to the waves. So, just before sunset I drive to Assateague Island State Park beach to wade in the surf and watch the sun go down in to the wrong direction – it is difficult to wrap my head around the sun setting with my back to beach – here I discover the essential magic of this place.

Most epic day ever… how I wish you had been here.