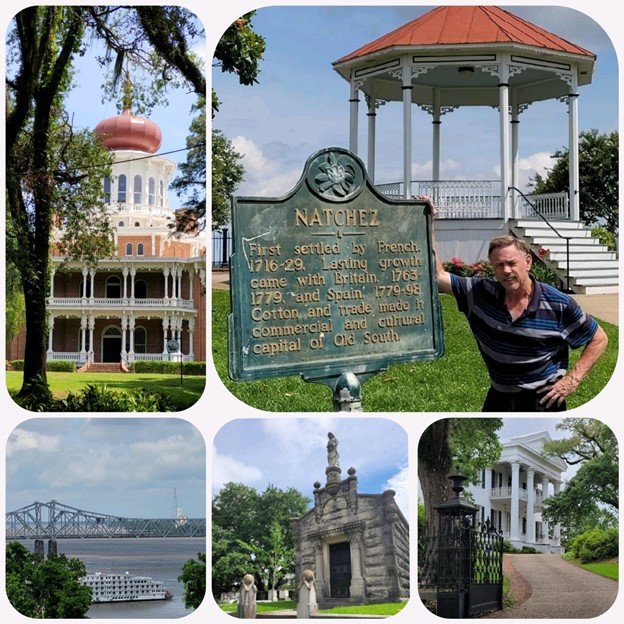 I could hear “Old Man River” calling as I approach Natchez, the jewel of the Mississippi River, perched atop the highest bluffs on the Great River – oak limbs spread wide. I stood on the bluff, looked out at the rich bottom land over in Louisiana, took in a deep breath of the hot, humid, history laden air and thought I could hear the Overture from Showboat.

Natchez is the oldest city on the Mississippi River – three hundred years of eccentric history and quirky locals – endlessly fascinating. Famous for it’s antebellum homes, built in the 19th century when the region boomed with cotton. The staggering riches of that era are hard to comprehend. I read that before Federal troops destroyed Clifton, the palatial home of wealthy Natchezians Frank and Charlotte Surget, Union Gen. Thomas Kilby Smith remarked that “one continuously wonders that such a paradise could be created here on earth.” Many of the cotton plantations were actually owned by people from the north, Natchez sympathized with the Yankee Army and provided safe haven for its military units – as a result, the Civil War left the City of Natchez relatively untouched.

Natchez is a challenging city to describe – it is complex and compelling. The locals compare themselves to New Orleans, but they will make sure you know that Natchez is older than New Orleans and better – Natchez draws you in.

To get a quick lay of the land I begin by hopping onboard a horse drawn carriage for a narrated tour of the downtown historic district. As I listen to stories – in the south they call them yarns – of old family feuds and the colorful history of Natchez – I find myself thinking the rambling tales are a bit embellished but the more I learned the more I realize that what I am hearing is actually true. Seems the people of Natchez have always had a flair for the outlandish.

Any tour of Natchez ought to begin where the city itself did—on the riverside strip of land known, suitably, as Natchez Under-the-Hill. The very first French colonists landed here in 1716. A stroll through the heart of Natchez reveals architectural treasure —from classic Greek columns to whimsically carved gables, imposing porticos and enough historic storefronts to overwhelm you.

While I enjoyed driving around and marveling at the Antebellum mansions, I only toured two, first the most famous of them all, Longwood – circa 1861, an “Oriental Villa”, and perhaps the grandest octagonal house in America. The most surprising aspect came after I’d gone inside, seen the “basement” level and was on my way upstairs… Longwood never was finished! That’s right, the upper five levels of this mansion are still just bare wood. It took 75 workers 18 months to complete what exists of Longwood today, construction was abruptly halted with the advent of the Civil War. After falling into disrepair until the 1970s, it was acquired by the Pilgrimage Garden Club. Today, the home is on the National Register of Historic Places, and is a National Historic Landmark. The William Johnson House, owned and built by a freed Black slave that himself owned slaves. Johnson kept a detailed diary until his death 1851, a lovingly preserved artifact from the mid-1800s. Known as the “barber” of Natchez, William Johnson began his life as a slave. His freedom at age eleven followed that of his mother Amy and his sister Adelia. After working as an apprentice to his brother-in-law James Miller, Johnson bought the barber shop in 1830 for three hundred dollars and taught the trade to free black boys.

At the site of the historic slave market – Forks of the Road Slave Market – which by some measures was one of the most prolific marketplaces for the internal slave trade in the United States, I was surprised to find it is only marked by a sign and a concrete slab filled with manacles and chains. Estimates have over 1,000 human beings bought and sold each year in this very spot. It is a sobering reality.

Natchez City Cemetery,1822, is a grand collection of tombs, mausoleums, and ornate iron fences where Catholics and Jews and Blacks and Confederates and Unionists and Spanish and French and wealthy plantation owners, side by side with servants and prostitutes and untold other dead lie in state, buried beneath a jumble of rolling hills, weeping Spanish moss and marble monuments. Right next door is the Natchez National Cemetery, which honors those who served in the armed forces.

Natchez is a town filled with traditions – none more cherished than the Natchez Pilgrimage. The Pilgrimage started back in the 1930’s when the grand Natchez homes were falling apart, and nobody had the money to fix them up. Some of the ladies of Natchez formed The Natchez Garden Club and planned an event to highlight the town’s gardens. Unfortunately, there was a late spring freeze and the ladies scrambled to find something else to offer the tourists. The women decided to open their homes to the public and thus the Pilgrimage was born. There is more to the Pilgrimage than just touring grand homes with period costumed docents – the pilgrimage season also hosts the Historic Tableaux that depicts life in Natchez from its inception to the Civil War through spectacle, song and dance.

I packed a lot into my short time in Natchez, I discovered sugar kettle lily ponds – “Knock-You-Naked” margaritas at Fat Mamas Tamales, Drag Queen Bingo for a local charity ‘Ya’ll Means All’ and a town where locals love of history borders on an obsession, something akin to mine. The best saying, I heard that is quotable; “In Natchez we don’t hide our crazy we parade it out on the front porch, sit it in a rocking chair, and give it a cocktail.”

Natchez rivals the Gulf Coast in breathtaking colorful sunsets, and I am blessed with the very best view from my RV parking spot on the Vidalia riverfront. As the sun sets on another Wednesday I look forward to tomorrow when like Old Man River, I “keeps rollin’ along”…