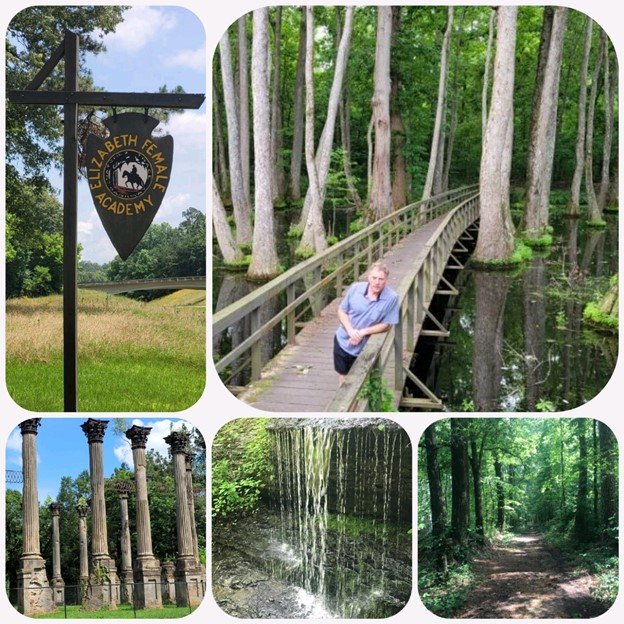 It’s Wednesday again, and I know some of you noticed that I was offline last Wednesday, unexpectedly. Life on the road comes with many unexpected twists and turns and last week one of them included a side trip to “Technical Difficulties”. Not a great place to visit. 1 star out of 5, Do Not Recommend. But I am back today, with tales from the Natchez Trace and thank you to all the kind souls who called to make sure I am still alive.
The Natchez Trace Parkway roughly follows the “Old Natchez Trace” a historical travel corridor – here over the centuries, thousands have passed, carving their footprints and their stories into the land. Used by buffalo, moccasin-clad Native Americans, pioneers, “Kaintucks” – rustic Kentucky characters who transported commercial goods down the Mississippi River to Natchez – once there they would sell the boats along with the goods and traveled by foot home along the Trace – Civil War soldiers and future presidents. During the early 1800’s the US Army expanded the Trace from a foot path to a post road and the Natchez Trace became an official “post road” to expedite mail delivery. Today, the post rider is the official symbol of the Natchez Trace Parkway. After the steamboat was invented the old Natchez Trace was mostly forgotten until 1938, when the Daughters of the American Revolution convinced the powers-that-be to preserve this chapter of our nation’s heritage and create a national historic parkway.
As I begin to trace the path – every mile from Mile Marker 0 to 444 – I am immediately drawn to the quiet beauty and peace surrounding me – no eyesores allowed – the sound of birds in the trees and every mile a fresh treasure! There is so much to see, learn and experience along this fascinating, richly historic route. I hope to immerse myself in this place and absorb some of the adventurous spirit of those who passed this way before me.
My first stop on the parkway – 5.1 miles -Elizabeth Female Academy Site. Now in picturesque ruins – founded in 1818, the first school for women chartered by the state of Mississippi and possibly the first college for women in the United States. Mississippi was a pioneer state in providing education for women and the school was far from a token effort. The young ladies studied Latin, botany, history, natural and moral philosophy, chemistry, mythology, Christianity and John James Audubon taught courses at the academy.
Emerald Mound – 10.3 – One of the largest Indian Temple Mounds in North America, covering eight acres. It’s builders were ancestors of the Natchez Indians and was used between 1250 and 1600 AD as a ceremonial center. We were the only people there and it was an incredible feeling to walk around this sacred place, feel the energy in the air, reflect on the ancient history of the trace and pay respects to those who built it – one basket full at a time … it leaves a lasting impression.
Mount Locust – 15.5 – constructed in 1780 and the only stand still standing on the Trace. Stands were inns where Trace travelers could rest for a night, The restored plantation and historic stand are open for tours but the buildings and gift shop were closed, so I walked the grounds and discovered a cemetery for slaves in the back woods with only one gravestone standing, sad and rather haunting but a true flavor of the Trace.

At Mile Marker 30. I leave the parkway to see the Windsor Ruins just outside Port Gibson, MS. Built in 1859 the plantation was a site to behold – the largest antebellum Greek Revival mansion ever built in Mississippi. Built by Smith Coffee Daniell II, who died from a mosquito bite before he had barely unpacked in his new home. The date was April 12, 1861, the first day of the Civil War. Legend says that from the roof observatory, Mark Twain watched the Mississippi River. A Union soldier was shot in front doorway of the home and the mansion was used as a Union hospital and observation post, which spared it from being burned by the Union troops. However, after the Civil War, during a house party, a careless guest left a lighted cigar on the upper balcony and Windsor burned to the ground. Everything was destroyed except 23 of the columns, balustrades and iron stairs. As I stand gaping, I think to applaud the enslaved people who made the bricks in these columns, which have stood ramrod straight all these years. I want to say that it is a magical place because there is a feeling of enchantment here but I can’t seem to forget this place is an attraction because it’s been very, very unlucky.

Sunken Trace – 41.5 – the sign points away from the ribbon of highway into the deep woods. As I follow, I drop down into a deeply eroded / sunken remnant of the old Trace. In the five minute walk along this sunken trail, I swat a mosquito and my imagination carries me back to the early days and the hardships of traveling the Trace – mosquitos, heat, swollen rivers, swamps and riddled with marauders the thought of walking over 400 miles in these conditions is mind blowing. As, I look back at my footsteps in the wet trail I know I am leaving them for the road to remember.
I end my first day at Mile Marker 78.3 – Raymond, MS – a place of History – as I leave the RV I stop to admire a vivid pocket garden on the corner and see a sign “Garden of the Month” – as I linger to take a picture the lady who owns the garden approached me and said she was tickled to her toes that a tourist was admiring her garden. Then she leaned towards me and whispered – I am no gardener, I just plant whatever comes my way and let it grow however it pleases. Imagine my shock to get Garden of the Month. They must be running out of gardens. Want to see my beautiful blue ribbon”? I can’t wait to introduce you to my new friend when we are here.
More to report about Raymond and my travels on the Trace next Wednesday. We have only just begun.