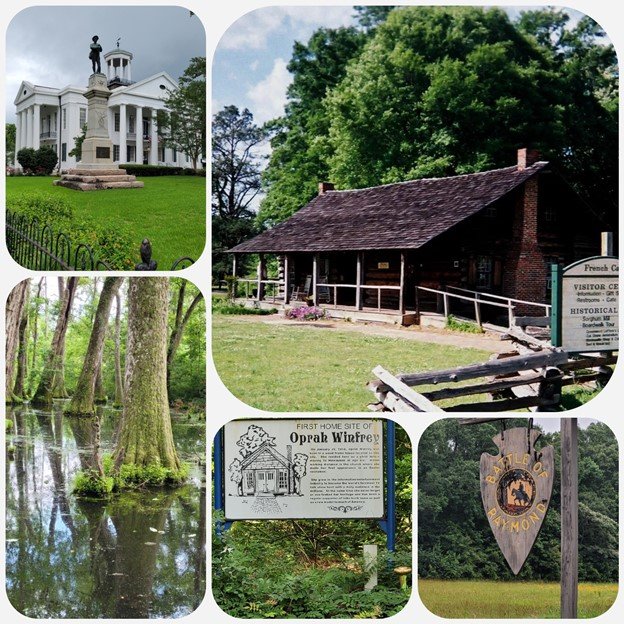 Last Wednesday, I left you standing on one corner of the old fashioned town square in Raymond, MS where I was in the process of being charmed by a friendly local as well as the unexpected prosperity of this little city.

A short walk down a shady street lined with stately homes, is one of the last grand courthouses of the South constructed by slave labor before the outbreak of the Civil War – a stunning Greek Revival structure – and St Mark’s Episcopal Church which Union soldiers used as a hospital – blood stains can still be seen on the church floors today.

The Battle of Raymond was fought here by Union and Confederate soldiers in 1863 as part of General Ulysses S Grant’s Vicksburg Campaign. Despite hard times after the war, Raymond has survived and today is brimming with grace and good cheer. The Walking Tour brochure describes Raymond as “ A place of history – a place in the heart – a place of promise – a place called Raymond”

Mile Marker 100 – Jackson, MS – A detour off the Trace Parkway to explore Jackson, MS and found another city in the South with an ethically fraught history, attempting to reconcile its conflicts. Jackson is making strides – I found a city in the process of a radical revitalization. I visited the new Civil Rights Museum of Mississippi and once again struck with how much I have to learn. The last exhibit before the exit – written on a mirror the words – If you want to be proud of yourself, you have got to do things you can be proud of. Oseola McCarty – Across town in the Bellhaven District – built in 1925 – is the Eudora Welty House – here Eudora wrote all her major works including her Pulitzer Prize winning novel ‘The Optimist’s Daughter’.

Mile Marker 122.0 – Back on the NTP, I meandered along until reaching the Cypress Swamp. Possibly my most favorite natural area on the Trace – just for the sheer other-worldliness of it – the boardwalk crosses through the swamp with beautiful tupelo and bald cypress trees with their knobby knees poking up through the dark water. I see an alligator slip into the water and disappear. It feels like spirits live here and you are compelled to hold hands and hold your breath as you walk deeper into the watery woods. This must be one of those places all the old books say you are supposed to push pennies into the soil for prosperity – I decide it can’t hurt, pull out the brightest penny in my pocket and bury it. In leaving I notice the last words on the Cypress Swamp signage … Allow enough time for the magic to work.

Mile Marker 160.0 Kosciusko, MS – Oprah Winfrey’s birthplace. Born of teenage parents on January 29, 1954, Oprah lived until the age of six with her grandmother Hattie Mae in this small Mississippi farm town. I read that Oprah’s grandmother taught her to read before she was three and she became known as “The Preacher” at her church because of her ability to recite Bible verses. The road Oprah lived on – Country Road 2207, is now Oprah Winfrey Road. The church where “Oprah Faced Her First Audience” with a recitation of the Easter Story is here and a vacant lot where the home once stood. An artist’s rendition of the house is painted on a sign marking the lot. There is truly little to see now, but it gives you and idea of how far she has come.

Mile Marker 180.7 – French Camp – The town was established as a trading post in 1810 by French-Canadian fur trader Louis LeFleur, and quickly became known as “Frenchman’s Camp.” When LeFleur opened his stand, he offered food and rest. Today, it is the soul of hospitality. I turn my watch back to the 1800s – explore the historic buildings, antebellum home, graveyard and sample life of the settlers who carved a way of life from the wilderness. This timeless treasure abounds with a colorful past and reminds that, as with everywhere we visit, the real story is about the people – settlers and Indians, merchants, robbers, the enormously wealthy and the tragically poor all came together here – at the heart of it all. After enjoying this taste of the past I am more than a little hungry and follow my nose to the Council House Restaurant, find a seat on the outdoor deck by an enormous fireplace for a steaming bowl of potato soup served with bread and sorghum molasses made at French Camp,

As evening falls on the peaceful NTP without a stop sign or billboard to remind me of the modern-day world, I drive through a countryside lost in time.
Next Wednesday along the Trace we visit Elvis, Helen Keller, Frank Lloyd Wright, walk a swinging bridge and let the “magic of the Singing River” cast its spell on us.