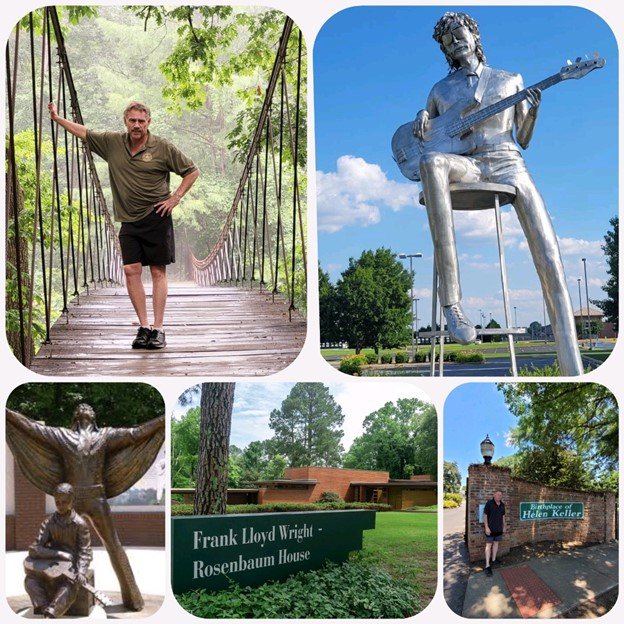 Ghosthunters rejoice!!! Mile Marker 233.2 – The Witch Dance stop on the Natchez Trace Parkway is legendary for its scary tales… the very name “conjures visions of eerie midnights, swirling black capes and brooms stacked against a nearby tree”. The old folks say the witches gathered here for nighttime ceremonies and to dance and wherever their feet touched, the ground withered and died, never to grow again. Who were these witches or from where they came remains a mystery but local Indians immediately began to avoid the scorched patches of ground. During the War of 1812 and the Creek War that followed, Andrew Jackson often traveled up the trace. Though there is no indication that he feared the spots, he did find them interesting enough that he recorded them in his journal. Today these “scorched spots” can still be seen and still nothing grows in their space and people continue to fear to be anywhere near on a dark and dreary night.

Mile Marker 259.7 – Tupelo, MS – Having spent a lot of time in Tupelo earlier in my travels and giving my impressions in detail on an earlier “Guess What Day It Is”, today my visit to Tupelo is quick – long enough to remind you that this is the birthplace of Elvis Aaron Presley. A left turn off Main Street onto Elvis Pressley Drive and the very house in which the ‘King’ was born on January 8, 1935. I read the “Elvis was lucky – that he was in the right place at the right time, that he made cool records in the ‘50s, made horrible films in the ‘60s and then started taking the wrong medication and died in the ‘70s”. Reducing his life to “Elvis got lucky” doesn’t begin to tell his story, he adjusted to a new form of music that wasn’t like any other form of music. He did something original, something that affected everything that came later. That notion of Elvis as just a ‘lucky guy’ is, as Sam Phillips said, “an injustice.” Before leaving Tupelo this time I stop for a ‘Smash burger’ at The Neon Pig – Voted Best Burger in America – this burger really is amazing – made with aged filet, sirloin, ribeye and bacon ground together and served on a thick bun with bacon bits, cheddar cheese, onions, bbq sauce and remoulade.

Mile Marker 266 – The Natchez Trace Headquarters Visitor Center – closed last time and a place I really wanted to visit because it holds all things related to the Trace – this time I was able to view the Natchez Trace Parkway video and talk with park rangers, planning details and interpretive guides for our Daytripping tour next spring. The ranger here convinced me that there is no better time to visit the NTP than when the dogwoods bloom in the spring.

Mile Marker 275.2 – Dogwood Valley – flowering dogwood is common in this neck of the woods and while dogwoods, redbuds and spring wildflowers are found all along parkway, here the NTP passes through a valley with a unusual strand of large dogwood trees towering overhead. I am too late for the springtime bloom this year but anticipate seeing the dogwoods in all their glory next year on the Daytripping bus.

Mile Marker 304.5 – Tishomingo State Park – without a doubt the most beautiful state park in Mississippi – and no doubt the same timeless beauty that enchanted Chief Tishomingo and native American’s centuries ago. I was lured here by reports of the famed Swinging Bridge – built in 1929 by the Civilian Conservation Corps – this 200 ft long suspension bridge crosses over Bear Creek and leads to a wonderful waterfall – a must do, without a doubt. A monument to the CCC workers and trails that follow their original camp also grace the park as a remembrance to those men whose labors we still enjoy today. On my way back to the NTP I stop in nearby Iuca, MS to visit the world famous mineral springs state park and to taste for myself the water that won the 1902 World’s Fair prize for best mineral water.

Mile Marker – 308. 9 – Alabama – the NTP travels 33 miles through the northwest corner of Alabama and crosses over the Tennessee River.
Mile Marker 330 – Helen Keller Home – I detour from the NTP at Tuscumbia, AL to celebrate the “miracle” that is Helen Keller’s life and visit her birthplace and home – ‘Ivy Green’. Trapped in a dark, soundless world after a childhood illness left her deaf and blind, Helen Keller saw the potential in her own mind and went on the read French, German, Greek and Latin in Braille. She entered Radcliffe College at 20, wrote 11 books, and lectured in 39 countries on five different continents. She inspired two Oscar-willing movies and received the Presidential Medal of Freedom, the highest honor an American civilian can receive. Helen’s teacher and lifelong companion, Anne Sullivan was twenty years old when she came to live with the Keller’s in 1857. The pump where Anne Sullivan spelled w-a-t-e-r into seven-year-old Helen’s hand as she held the other hand under the water still stands. Here, Helen correlated the letters with the water flowing over her hand. The breakthrough of learning language that changed the life of Helen Keller and gave hope and help for others living with disabilities.

Mile Marker – 336 – The Shoals and Florence, AL – Internationally known artists including Aretha Franklin, The Rolling Stones, Willie Nelson, Martina McBride, Tim McGraw and countless others recorded here and Frank Lloyd built here and the river sang here. I wasn’t familiar with the rich music history of the area but quickly learned. Earliest history noted the thunderous stretch of shallow rapids where the Tennessee River flowed through the hills and valleys of this area. The Cherokees called the river, “Unashay” or Singing River. Legend has it that an American Indian maiden lived in this flowing river and sang beautiful songs. Even today, it is said the magic of the Singing River will cast its spell on you.
Florence is a major stop on the American Music Triangle, thanks to the Swampers – a group of session musicians based in Muscle Shoals, AL. From the 1960’s to the 1980’s, these musicians have been associated with more than 500 recordings, including 75 gold and platinum hits. They were masters at creating a southern combination of R&B, soul and country music know as the “Muscle Shoals sound” to back up black artists, who were often in disbelief to learn that the sessions musicians were white.

In 1939, Stanley and Mildred Rosenbaum were given $7,500 as a wedding gift from Stanley’s parents, along with a piece of property directly across the street from their house for the construction of a new home. The newlyweds asked Frank Lloyd Wright to build that home. Referred to as one of the “purest examples of Wright’s unique style” the classic Usonian house was designed in a characteristic L-shape and is made from natural materials – largely cypress wood, brick and glass and is capped by cantilevered roofs that cover both living spaces and the adjoining carport. By 1948 the family had grown to include four sons and the couple called upon Wright to add two new wings – a bedroom and a larger kitchen. The Rosenbaum’s were the sole owners of this American architectural treasure until 1999 when they donated the house to the City of Florence. Sweet Home Northwest Alabama!
Next Wednesday, Mile Marker 440 and the terminus of the Natchez Trace Parkway are just around a bend in the road.