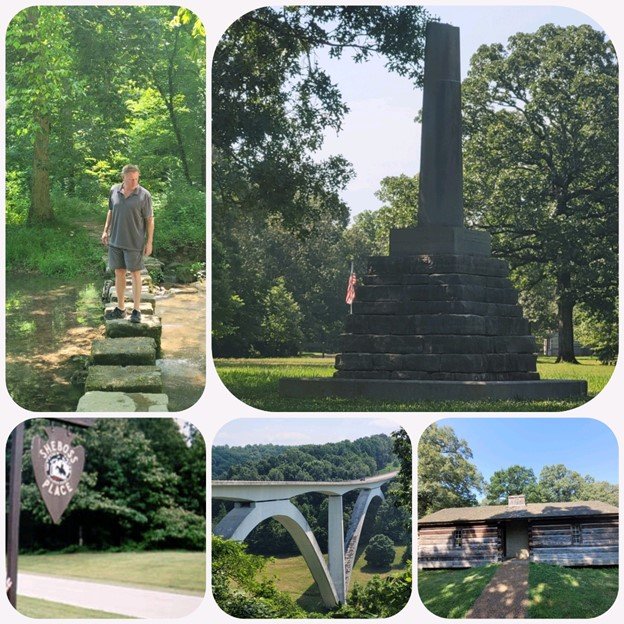 The final leg of my amazing journey on the Natchez Trace Parkway and I am dragging my feet, slowing my pace, lingering longer at each stop – reluctant to leave the trace behind.

I heard chatter about a remarkable stop off the trace – Tom’s Wall – but hesitated to visit – it isn’t listed on any official trace publications and is more associated with the Trail of Tears than the NTP but then decided I couldn’t pass it by. Officially, the Wichahpi Commemorative Stone Wall – Tom Hendrix garnered worldwide recognition for building a wall to honor his great-great grandmother, Te-lah-nay. She was a Yuchi Indian forced to leave her north Alabama home and walk the Trail of Tears path to Oklahoma. Leaving Alabama meant leaving her beloved Tennessee River. The Native Americans believed a woman lived in the river and sang to them, hence the nickname “The Singing River.” When Te-lah-nay didn’t hear singing in any of the waters in Oklahoma, she knew she had to return home. Her path back was neither straight nor easy and it took about five years. She was just a teenager at the time, traveled all alone, and is the only person on record to have walked back home. Tom was told “We shall all pass this Earth, only the stones will remain. We honor our ancestors with stones” and those words changed his life – a wall of stones was going to be the memorial and over 30 years later, the monument is truly something to behold. It is the largest un-mortared rock wall in the United States and the largest memorial to a Native American woman. Each stone represents one step of her journey. Also, the shape, height, and width of the wall changes to represent the obstacles she encountered. There are stones from over 120 countries that come in every size, shape, texture and unique geologic features you can imagine. Until his death in 2017, he was at the monument wall every day to greet visitors and tell Te-lah-nay’s story as well as his own. In addition to building the The Wall, Tom tells the tale in the book “If The Legends Fade.” Inside the front cover, he poses the question: “If the legends fade, who will teach the children?” A trip to Tom’s Wall is emotional, inspiring and I leave touched by the dedication of one man to honor his ancestors.
Ahead of me – Meriwether Lewis Gravesite – the brass ring of the Natchez Trace Parkway for this Lewis & Clark enthusiast.

Mile Marker 385.9 – Meriwether Lewis Gravesite – finally I arrive at the stop called simply, Meriwether Lewis, the final resting place of the great explorer. Many times, I have followed the steps of Meriwether Lewis along the route of his life’s crowning achievement – the Lewis & Clark Expedition – along the trace I have followed the steps that led to his death. Lewis led an amazing life. Born August of 1774, he literally grew up with the new republic, he was eight months old when Paul Revere made the legendary ride that signaled the beginning of the War of Independence, and the birth of the new United States of America, which Lewis was to serve with distinction. In January of 1793 the American Philosophical Society of Philadelphia accepted the proposal of one of its leading members, Thomas Jefferson, to send an overland expedition in search of the Northwest Passage, the fabled all-water route to the Pacific Ocean. Eighteen-year-old Meriwether Lewis eagerly volunteered to lead it, but his offer was rejected due to his youth and inexperience. That expedition was soon aborted anyway. In 1801, at age 27, he was summoned by newly elected President Thomas Jefferson to serve as his personal secretary and aide. January of 1803, Congress appropriated $2,500 to mount an official military expedition to the Northwest, and President Jefferson named Lewis as its commander. On May 14, 1804, the “corps of volunteers for North West Discovery,” as Captain Lewis titled the expeditionary force, embarked from St. Louis, bound up the Missouri River toward the Pacific Ocean at the mouth of the Columbia River. Captain Lewis was three months shy of his 30th birthday. After two years, four months, and ten days, the Corps of Discovery returned triumphantly to St. Louis on September 23, 1806. He was thirty-two years old. Sadly, Meriwether Lewis died along the Natchez Trace three years later, under mysterious conditions. The truth of his death has been muddled by contradictory accounts; in one account Lewis was found in his cabin after sudden gunshots. In another account, the fearless explorer was found wounded outside of his cabin after an audible scuffle with unknown men. The inn-keepers wife, Mrs. Grinder, claimed that Lewis had behaved strangely during dinner before his death, he was depressed by a recent falling out with President Jefferson and Lewis had previously attempted suicide. Lewis’s money was missing from his cabin and an 1848 postmortem conducted by the Tennessee State Commission concluded that Lewis likely died “by the hands of an assassin.” Although historians debate the circumstances of Meriwether Lewis’s death to this day, one thing is certain: Lewis’s death was an unfortunate early end to the life of one of America’s greatest explorers and a brave adventurer. Today, a humble memorial marks Lewis’s grave, near the cabin where he died. The monument is a broken shaft, done deliberately as was a common custom in the 1800s to represent a life cut short by an untimely death. Reflecting on the life of this great American, I wonder what Lewis would have accomplished had he lived a full life – but, in truth I know, he lived more life in 35 years than most of us ever will.

Mile Marker 391.9 – Fall Hollow – Immediately, I can hear the water rushing over the falls – the first part of the trail is paved and flat and brings me to an Observation Deck. The view from here is a stunning waterfall cascading down a sheer rock face. Most people turn around at this point but if you continue down a dirt trail – a somewhat steep but not dangerous decent the payoff is worth the hike. After a few minutes of walking, I start seeing trickling little waterfalls along the rocks that border the path, the forest gets much cooler and I feel like I have found a secret paradise. As I descend, the waterfalls get bigger and bigger until I reach the most amazing waterfall tumbling into a crystal-clear pool with a path to walk behind the falls – so cool, it just doesn’t get any better than this.

Mile Marker 400.2 – Sheboss Place – There’s nothing to see here, but once it was the site of a stand serving travelers along the trace and today is the site of one of the best laughs I had on the NTP. The widow Cranfield operated an inn, known as a stand with her second husband, an American Indian,
who spoke little English. According to Legend when approached by travelers about accommodations he answered every question by jerking his head towards his wife and muttering, “She boss”!

Mile Marker 428 – Leiper’s Fork – If you have been following my weekly message from the beginning you will remember that I visited Leiper’s Fork and Franklin last fall and couldn’t find words to share the lure of these two homegrown treasures that ooze Southern charm. This time I realize the immediate message is: Somebody loves this place!

Mile Marker 438 – Birdsong Hollow – Stretching across Birdsong Hollow in Franklin, TN is the majestic Natchez Trace Parkway Bridge. In the 1990’s the federal government was planning to bulldoze the steep hills on both sides of Birdsong Hollow to complete the parkway’s terminus in Nashville. However, members of the Natchez Trace Parkway Association convinced the park system to leave the hills intact and build this marvel across the hollow instead.
Mile Marker 444 – And just like that – the unassuming terminus of the Natchez Trace Parkway. For the past weeks I have flown high on the wings of anticipation exploring the amazing nature, culture, history, scenery and incredible peace of the parkway and am suddenly landed back in the real world with a thud. My only consolation; Loveless Café – fried chicken and biscuits!