Guess What Day It Is: Week 5 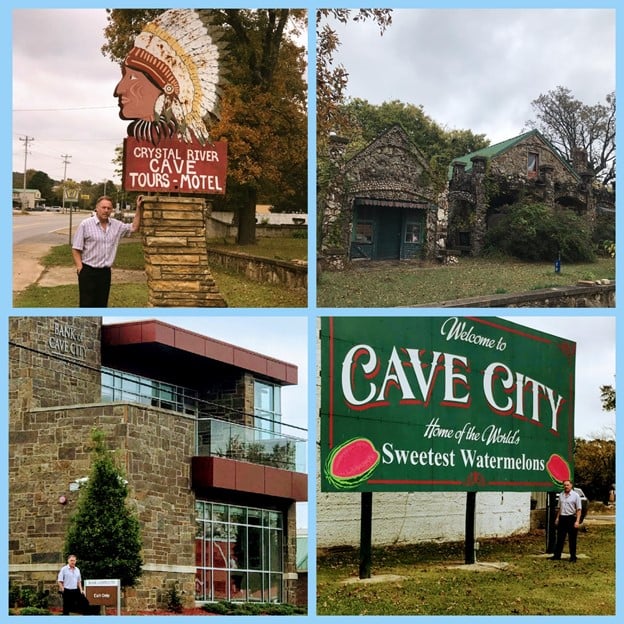 This road adventure I am on while Daytripping is shuttered came about because I am required to attend a monthly Board of Directors meeting in Cave City, AR So, this week I thought I would introduce you to Cave City. My mother, Margie Street Pettersen’s, home town and the place my parent’s spent their retirement. For years my mother made the monthly trip from Napa to Cave City to attend the board meeting – now I follow in her footsteps. The Bank of Cave City was founded in 1906. In 1919 my great grandfather Roe Street became president of the bank and and the bank has been controlled by my family for a century. Today, my cousin, John Beller is bank president and is a bright star – not only in our bank but in the community.

The Crystal River Cave – across Main Street from my mother’s house – gave birth to Cave City and was one of the first caverns in Arkansas opened to tourists. In the 1930’s the land surrounding mouth of the cave was purchased with the goal of making a tourist attraction – The Cave Courts. The exterior walls of the six existing structures used to make up the tourist court were covered with elaborate stone exteriors, constructed mostly of local Ozark fieldstone embedded with geodes, petrified wood, crystals, and Native American relics such as arrowheads and bone chips – an excellent example of 1930s folk architecture. The Cave Courts was a source of pride for the community until it closed in the 1950’s. In June of 1991, what is known as the Crystal River Tourist Camp Historic District was placed on the National Register of Historic Places and described as “quirky, unusual, puzzling and fantastic”. Currently the tourist court and cave are closed, the property is privately owned and in sad disrepair. Several years ago my mother was able to convince the cave’s owner to take a small group of Daytrippers on a tour down into the caverns – a rare treat as almost no one in Cave City has ever been inside the cave. It is a shame for this treasure to be allowed to deteriorate – it should be restored and opened to the public.

Just down the street is the modern stone-and-glass building that houses the Bank of Cave City. Built in 2013, it serves as an anchor for Cave’s City small downtown. The walls of the community room at the bank are covered with old photos and framed newspaper stories. There’s a framed campaign ad from when my grandfather, Eagle Street, ran for the state Senate – a seat he held for two terms. Most of the photos concern the area’s history of growing watermelons. The bank’s former home, just on the other side of a parking lot is now the city library.

Now that my parents are gone I take great pride in carrying on the family legacy by serving on the Board of the Bank of Cave City and having this opportunity to make my mother proud. I know she is watching from Heaven.
Missing you, stay safe.