Guess What Day It Is: Week 6

Posted on November 6, 2020 by John Pettersen 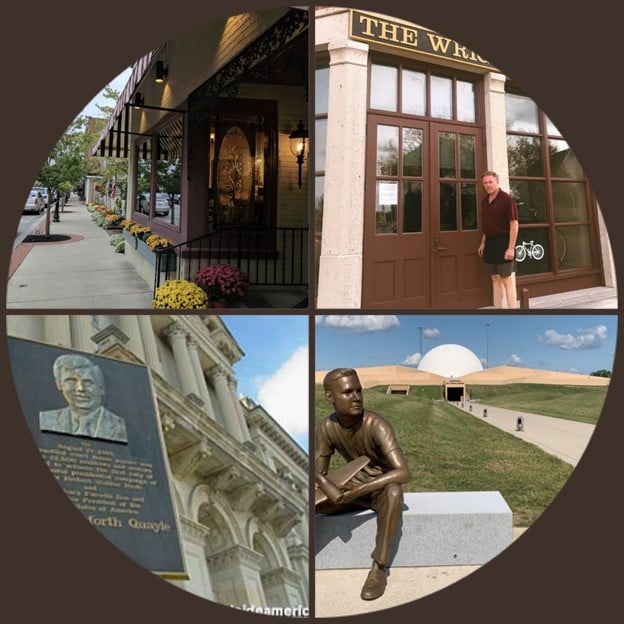 Dear Friends,
Today, in search of world famous Joseph Decuis Restaurant (I was just going to check out size, suitability and group accommodations – I wasn’t going to sample the Wagu ribeye without you – I promise) I took the wrong exit off the highway and stumbled upon …. Drum Roll … the Dan Quayle Museum! Located in Quayle’s hometown of Huntington, Indiana. Not at joke – a museum for Dan Quayle – that is what the sign read. Turns out, and I know this will shock you – it did me – seems as if not that many people were interested in a museum devoted to Dan Quayle so it evolved to become the Dan Quayle Learning Center and Museum of Vice Presidents. Presidents are celebrated with monuments, flaming tombs and Presidential Libraries, but much less celebrates the Vice President – no candy bars are named after their daughters. Yet, here in a northeast corner of Indiana lies a museum entirely devoted to the nation’s second-highest office; the only in the country – where on a ramble down vice president history lane you learn just how ignored the vice presidency has been for most of its history. The museum’s slogan “Second to One” sums it up far better than I ever could.
After this bumpy start the days drive took me through the heart of Ohio’s aviation roots – where I visited the Wright Brothers hometown of Dayton. I have been numerous times to Kitty Hawk, many of you have been with me and the Wright Brothers history there is awe inspiring and amazing – but today I touched the spot where the dream began – in the original Wright Brothers Cycle Company! Here, the brothers made a discovery that would forever change the history of the world. I had seen the old black and white photos – we all have – but I didn’t realize it still exists. Next door stands the Wright-Dunbar Interpretive Center, chronicling the lives of the Wright Brothers and another Dayton native, friend/business partner of the Wright Brothers, Paul Laurence Dunbar; the first influential Black poet in American literature. Across town, the Wright Brothers Museum at Carillion Historic Park houses the 1905 Wright Flyer lll! Orville died before Carillon Park was opened in 1950 but before his death, he had a hand in designing Wright Hall.
My day wraps up in Wapakoneta, Indiana, hometown of the first man to walk on the moon – Neil Armstrong and a visit to Neil Armstrong Air & Space Museum, which celebrates the sights and sounds of man’s first steps on the moon. The F5D Sky Lancer and the Gemini VIII spacecraft are on display live here as well as a truly impressive exhibit – ‘Infinity Room full of stars’, a moon rock and other Apollo 11 artifacts. I learned Armstrong’s first step on the moon was with his left foot at exactly 10:46:15pm and the moon’s surface vibrated for 55 minutes after the Apollo impact. When Armstrong headed to the moon he carried with him remnants of fabric and a piece of wood from the propeller of the Wright Flyer.
In one single day, I drove from man’s first flight to the moon – my thought as I go to sleep is that today I gained a greater appreciation of the power of dreams – dreams that change the world.
In Dunbar’s words,
“What dreams we have and how they fly
Like rosy clouds across the sky;
The fame that for a moment gleams,
Then flies forever, — dreams, ah — dreams!”
-Paul Laurence Dunbar
Missing you, stay safe.
John