Guess What Day It Is: Week 7 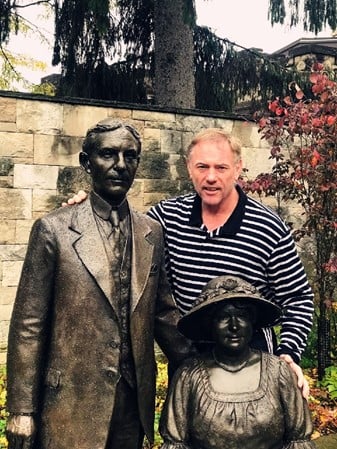 I feel I should be behind the wheel of Model T as I drive to the historic Ford Estate in Dearborn, MI. Fair Lane was Henry and Clara Ford’s final home which they moved into in December 1915, after the booming success of the Model T, the assembly line and Ford’s $5 workday policy. This was coming home for them, both were born and raised in Dearborn. Most of the original structures still stand today. I am intrigued by the powerhouse – so that is what I am going to share with you. Henry Ford had long been interested in alternative energy. When he built Fair Lane, he harnessed the power of the Rouge River to run the estate entirely on hydroelectric power. The dam was important to him because it was non-polluting. Ford cared deeply about the natural world and made efforts throughout his life to conserve it. As for the grand home, I was only able to walk the grounds, However, I am told “it is one of the first historic sites to be designated a National Historic Landmark, has an eclectic mix of English castle and prairie style, mixing European grandeur and Midwestern charm”.

Following Fords’ iconic tire tracks takes me to Greenfield Village where you can time travel without a machine. The Village came about as Henry Ford’s wish to showcase his vast collection of Americana and show how Americans through the years worked and played. When opened in 1929 structures included in his collection were the birthplaces, homes or workplaces of Ford, Edison, Luther Burbank and Wilbur and Orville Wright – many of them men whom Ford admired and/or knew as personal friends. Today, the village showcases 300 years of American perseverance and serves as a reminder that anything is possible.

Half an hour away is Grosse Pointe, MI where on the shores of Lake St. Clair at a place locally known as Gaukler Point stands beautiful Ford House. The impressive but unpretentious home of Edsel and Eleanor Ford and their four children. The walk from the grand gatehouse seemed to be about a quarter mile through sprawling grounds, formal rose garden past a cascading swimming pool with a waterfall that flows into a lagoon. At the main house I see a bride and groom posing for wedding photos so I circled around the back of the property and spend far longer than intended roaming the shore, taking in the splendid lakefront setting where in the distance I see white sails of the one boat brave enough to still be on the water this late in the season. The curator tells me a new visitor center is under construction to be opened in 2021. She also described the estate as “an American treasure and a monument to wealth and good taste”… I agree.

A short trip along Lakeshore Drive with fabulous homes and water views the whole way I find the Grosse Pointe War Memorial, situated on the grounds of the historic Alger Estate – the Moorings – a spacious Italian Renaissance-style home built in 1910 for Russell Alger and his family. In 1949 it was dedicated to serve as a perpetual memorial to those served and died in World War II, It’s mission to promote the ideals of democracy – the ideals valued within a perfect Union. When you read this it will Veterans Day – a day dedicated to honor our nation’s patriots and be grateful. This will be the first Veteran’s Day in 30 years that I have not spent on the bus with Daytrippers.

PS. I learned Russell Alger helped the Wright Brothers by investing in the Wright Co. and even bringing a plane to Grosse Pointe to give rides to potential investors. He allowed his daughter Josephine – age 12 at the time – to fly in a Wright Brothers biplane. Josephine was the inspiration for the song “Come, Josephine, in My Flying Machine”