Guess What Day It Is: Week 8 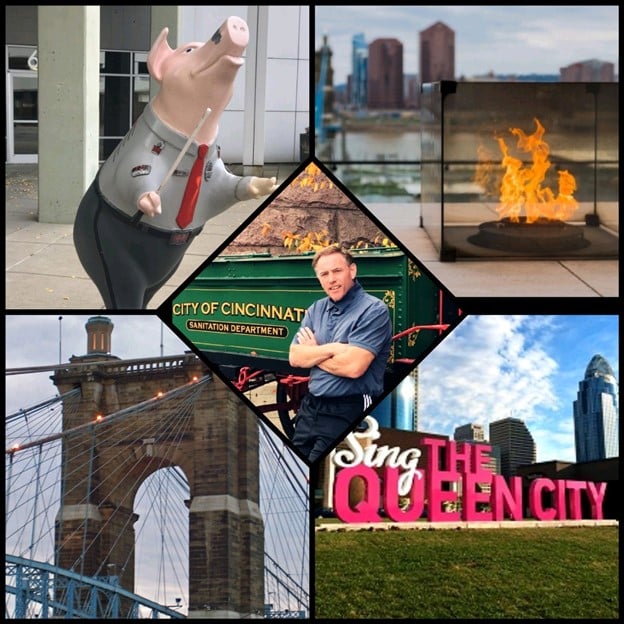 I can’t remember how many times I have driven through Cincinnati and formed my impression of the city by my view from the interchange. On a presidential library trip years ago our tour ventured off the freeway just long enough to visit the William Howard Taft House. After years of driving by at 65 miles an hour I decided it was time to see what I was missing. And now that I have toured the “Queen City”, I can say, without hesitation, that Cincinnati is very cool. First, this city boasts a 21C Museum Hotel – a sure badge of coolness – and the art collection is extensive as it is unique. I climbed to the top of Mount Adams to take a picture with Jim Dine’s 12 foot tall bronze sculpture of Pinocchio – the patron saint of tour guides – standing outside the Cincinnati Art Museum. Huge disappointment, access to the statue was blocked due to construction. It’s the first “to do” next time.

There is far too much to tell you about in this note but a few can’t-miss-must-see highlights:

The 1867 Roebling Suspension Bridge was the longest bridge of its kind in the world, until it was surpassed by Roebling’s more famous creation, New York’s Brooklyn Bridge – you will recognize it’s unmistakable resemblance – in 1976 to honor the Bicentennial the bridge was painted blue and it is striking. The Great American Ball Park – home of the Cincinnati Reds, perched on the riverfront in downtown, the Bengals impressive football stadium – forty amazing murals, whimsical outdoor art, stunning public water fountains and home to 5 US presidents: William Howard Taft, Rutherford B. Hayes, Ulysses S. Grant, William Henry Harrison, Benjamin Harrison AND George Clooney and … well you will see it all when we return on tour.

Today, my mission is to see the National Underground Railroad Freedom Center located right on the banks of the Ohio River where many crossed the mighty Ohio on their way to freedom. The river was the dividing line between slave states, Kentucky on the south, and free states, Ohio to the north. The museum is dedicated to celebrating the heroes who fight for freedom throughout the history of slavery. There are 3 floors of exhibits, a video narrated by Oprah Winfrey telling the story of what slaves went through to cross the Ohio, an authentic 1830 slave pen, abolitionist histories, a choose your path interactive escape experience and an eternal flame. It was compelling – not just the history of slavery but also a look at how slavery effects our world today. At the museum I learned the home of influential antislavery author of Uncle Tom’s Cabin, Harriet Beecher Stowe, is also located in Cincinnati. I headed straight there and found the house in the process of a much needed renovated. While it is obvious that they are hard at work it is in a very sad state. But the story is still as grand as the house once was – and no doubt will be again. Stowe came from a line of abolitionists; she and her siblings were greatly influenced by her Pastor father. When President Lincoln met Stowe he stated, “you are the lady that helped get the war started.” This was the Stowe family home for twenty years and Harriet lived here from 1833 – 1836. Not to be confused with the National Historic Landmark house in Hartford, CT which we have toured.

I am not sure why I never knew Cincinnati was such a cool place but I am convinced that Cincinnati is trying to keep it’s coolness a secret.