Guess What Day It Is: Week 9 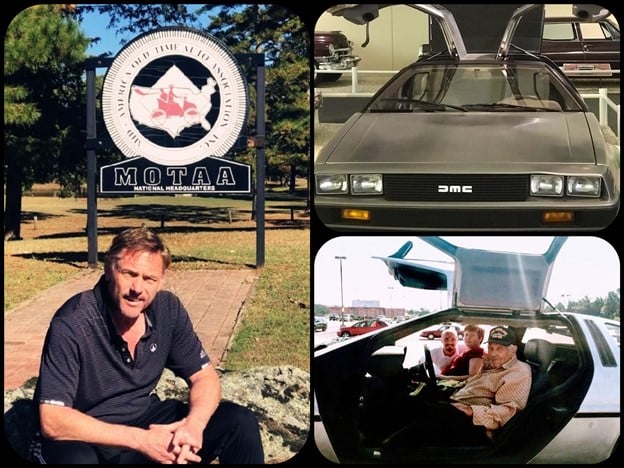 Today’s stop is personal – I am atop beautiful Petit Jean Mountain in central Arkansas at the Museum of Automobiles founded by Winthrop Rockefeller in 1964.

When I inherited my father’s mint-condition 1980 DeLorean following his death in 2017, I felt it belonged in a museum. My dad admired the late Governor, so I was elated when his beloved DeLorean found a home at Governor Rockefeller’s museum alongside Rockefeller’s 1967 Cadillac featuring a sterling-silver Santa Gertrudis bull hood ornament – like the ones he raised on his ranch.
Winthrop Rockefeller was a third generation of the Rockefeller family and 37th Governor of Arkansas. He moved to Arkansas in 1953, establishing “Winrock Farms” cattle ranch on Petit Jean Mountain. Among many other pursuits, Rockefeller collected antique and classic cars. So many that, in 1964, he decided to found the Museum of Automobiles. Today this museum houses over 50 gorgeous, vintage vehicles from 1904 to 1981. The museum is also home to the only known Climber vehicles in existence. The Climber Motor Corporation was Arkansas’ first automotive manufacturing company. The company founded in 1919 prided itself in making vehicles that would climb like a tractor. By 1923 the company was gone. Other standouts in the collection include Rockefellers’ 1914 popcorn wagon, a 1904 Oldsmobile French Front, a 1913 Metz Runabout, a 1929 Marmon Coupe and now my Dad’s 1980 DeLorean.
In November of 2018, a handful of Daytrippers on our Arkansas tour joined my family here for the DeLorean’s dedication – it is a memory that will stay will me always.

This is my first time back – it is a glorious fall day in an absolutely beautiful setting and I feel deeply feel the peace of this place. I thankful for this quiet commune with nature and the memory of my father – I expected to be overwhelmed by my feelings of loss but instead am filled with gratitude for his life.

Even with all the chaos and challenges of this year, there is still so much to be thankful for this Thanksgiving. I cannot be more grateful for you and the support you have shown Daytripping each and every step of the way. Happy Thanksgiving.